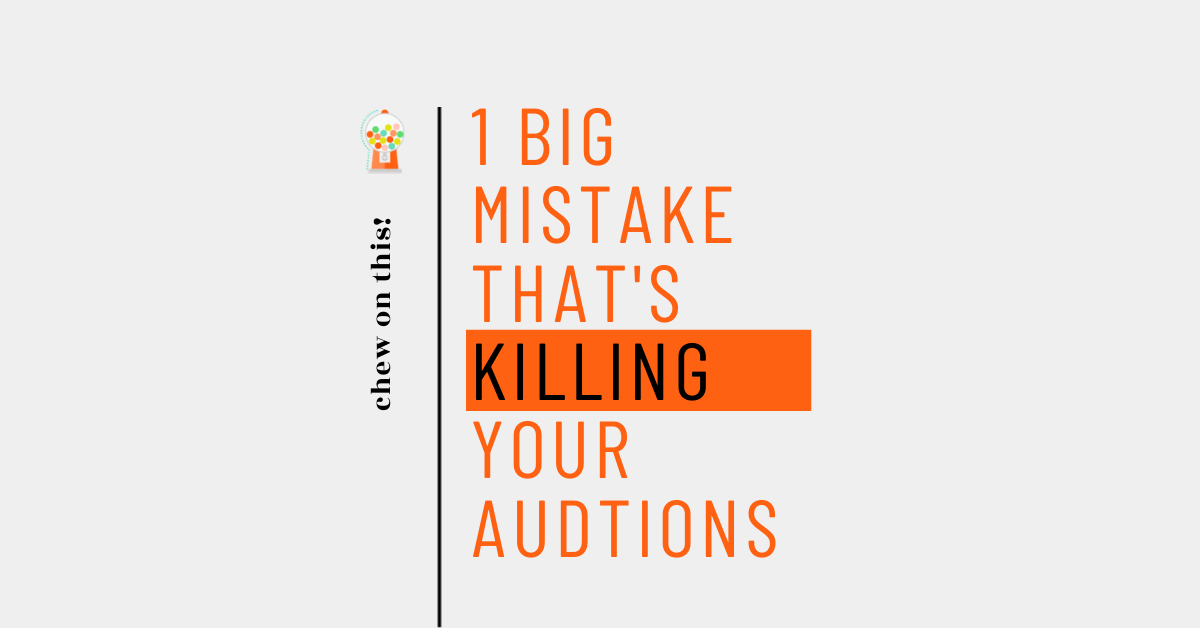 The idea of “more auditions” is at the top of most actor’s wish lists. More auditions equal more opportunities to act so I say, “keep ‘em coming!”

As a private audition coach, I’ve seen hundreds of actors and their audition processes. Time and again, I see actors make the same glaring misstep: not reading the script. It’s an audition-killer.

What if you just don’t have time?

Look, I get it. Sometimes you get an audition at 6pm while you’re still at your thrival job and you gotta be there at 11am. Seems like your time would be best spent memorizing your lines and doing your best. But you have some options:

ASK FOR A WINDOW
If you let your agent know about your tight turnaround, they can request a later audition time for you. You may not always get it and should reserve this request for when you really need it! Even if your 11am audition gets moved to 1pm, that gives you extra time to look over that script.

MEMORIZE LINES BEFORE BED, READ SCRIPT IN THE MORNING
If you’re worried about memorization, there are techniques to use your script effectively in this post. But if there’s a ton of dialogue, work on the toughest passages before you go to sleep. Your brain tends to “work on” the last thing you did before bed while you sleep. So take advantage of that time for memorization. But when you wake up, have your coffee while reading that script.

READ THE FIRST 10 PAGES
If you’ve got a 90 page feature script and cannot squeeze in the read, at least read the first 5-10 pages. A lot is set up in the first pages of a script. Least of which are the main characters, themes of the story, and tone. I’ve seen a lot of actors totally miss the tone of a project because they didn’t read the script. The opening pages set the stage, at least give yourself that much.

What can you miss when not reading the script?

Casting directors do their best to include important information in the audition info. But they’re human and they’re busy. They miss things. When you read the script, you can find all kinds of information that will inform the way in which you say your lines. Here’s an example:

A few years back, I had a client auditioning for a medium-sized role as a detective in an indie feature. His audition scenes seemed pretty straight-forward “interrogation scenes.” – we’ve seen a million of them. You can sorta predict how one would play it. He had a seemingly innocuous line: “When was the last time you saw Jessica?”

I had insider info! I’d auditioned for a different role in this project already and had read the script! It was clear to me on our first read-through that this actor had not. See, what this actor didn’t know is “Jessica” is his daughter who went missing from their home three days earlier!

A detective interviewing a suspect about his own missing daughter would say it a little differently than other missing persons. Emotions would bubble under the surface that would be missing from an actor without that information. If neither of us had read the script, we wouldn’t have known. To me, that would be pretty embarrassing if you got called out on that by a casting director.

This is only one example of many I could share with you. One client didn’t realize the character she was talking to, Leslie, was an invisible Alf-like monster who could only be seen by her! Wouldn’t that affect your audition quite a bit?

There will be times when reading the script won’t give you much more information than you already had. But having all the information is your job as an actor. Which leads me to…

Understanding the story is your main job!

Here’s where I get a lil’ sassy and remind you that an actor’s job is to interpret the writer’s story and bring it to life. How do you expect to do that when all you read is 4 pages of a 100 page script?

There will be situations where you do not have the time to read the whole thing. If that’s the case, let yourself off the hook by doing the best you can in the time you have. But if you have the time, it is your duty to respect the project enough to read what you’re auditioning for. After all, you’re expecting them to hire you, feed you, and likely pay you lots of residuals for years to come. All while they spend thousands of dollars to get this project made. Your job does not start on your first day on set. Your job starts as soon as you confirm your audition.

You work so hard to get every audition. And every audition is a chance to practice what you want to do for the rest of your life. Act accordingly.

Want even more tips and tricks to make the most out of every audition? Grab my FREE AUDITION CHECKLIST. You can use this handy cheat-sheet for every opportunity in the room. And it comes with a free audition class where I walk you through every technique. It’s a FREE audition class you can take from the comfort of your couch. Yes!