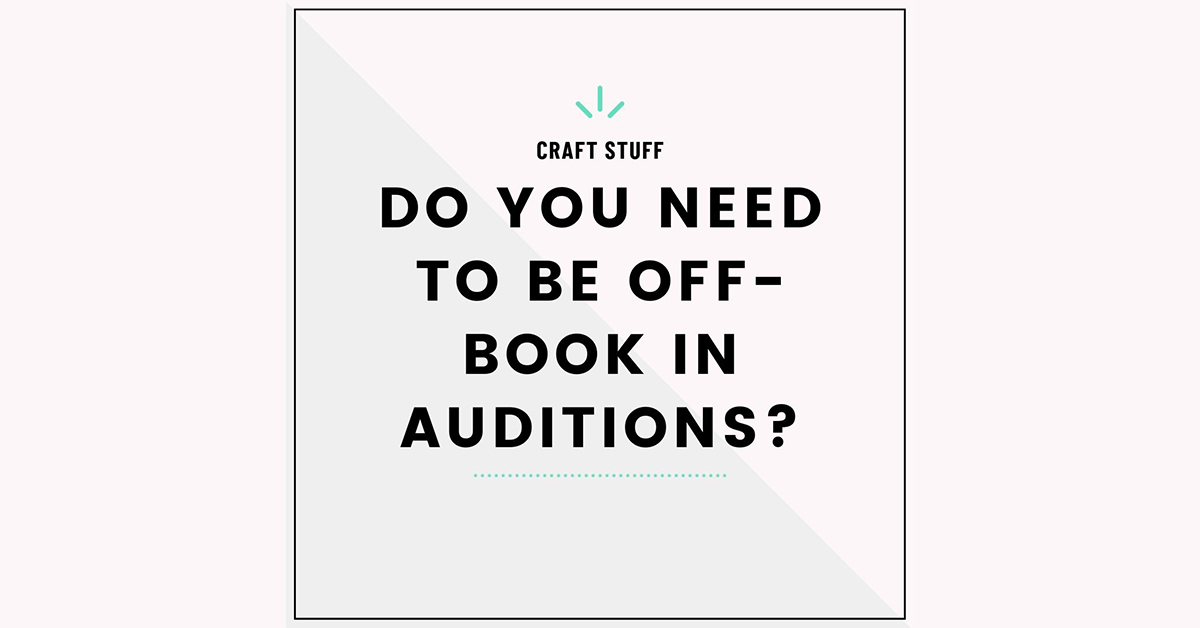 You’ve finally landed a big, sassy audition for tomorrow and eeeeek, there’s a LOT of words.

You’re scrambling to find someone to cover your shift and get home to do some much-needed memorization. But how important is it to be off-book in your auditions?

This question comes up a lot from actors new to the industry. But seasoned pros find themselves still wondering the same thing. Allow me to dispel the rumors and soundbites once and for all.

First, let’s look at the benefits of being fully memorized. When you know the words of the script inside and out – when you’re able to rattle off the words without conscious effort, it frees you up to live “in the moment” and give a richer, fuller performance. No question that this is the ideal scenario, but what if it’s nine pages of jargon and you just got the script last night? It starts to feel like a memorization test.

If you’re not perfectly memorized, won’t you look like a bad actor? Not necessarily.

Three ways not being memorized hurts your auditions:

You’re so unmemorized that you clearly didn’t put the work in to prepare.

If you’re paraphrasing because you actually don’t care about the words the writer wrote and re-wrote, you’re gonna look like a jerk.

If you rehearsed the lines a few times and thought you could go in and “wing it,” and you forget your lines, it’s very clear to the casting director and yeah, it looks bad.

You flub a TON of lines in your audition because you’re just that nervous.

Everyone gets nervous from time to time. And everyone flubs lines here and there. In fact, when auditioning for my last big job, I dropped my lines twice… and still booked it. YAY.

But the honest truth is this: if you’re so nervous in your audition that your script is shaking and you keep dropping lines, you’re not ready to be on set. Those are the facts. You’ll get there one day with practice, coaching, and classes. But today is not that day. Don’t be hard on yourself about it, just get to work.

You’re so focused on getting the words right that you forget about the story and just speak the lines.

This is death. Because it means you’re likely pretty good at “faking it.”

You’re good enough to do a passable job and maybe you’ve even booked a job or two. But this will never help you break into the next tier for your career.

But the last option is the one I’m guessing most readers fall into. They spend all night just drilling the lines so they don’t mess up in the audition room. But perfect memorization doesn’t book jobs. Superior storytelling with one or two flubbed lines will beat a flat, word-perfect version any day.

Just remember : You will never book a job because you were perfectly memorized. But you might lose a job if you focus ONLY on memorization and not on story.

STORY IS THE MOST IMPORTANT THING

A casting director holds you as a professional in their mind until you give them a reason to believe otherwise. If you’re given nine pages of legal jargon the night before an audition, a reasonable person would understand that you will be less memorized than you’d be on set. They know that when you book this job, it will get your full and undivided attention and you’ll show up on set ready to rock.

With that being said, if you’ve truly spent enough time preparing the material, rehearsing, making strong character choices, and getting specific about what you’re actually saying in the scene, it’s fair to say that you’d be pretty familiar with good chunks of dialogue as a result.

If you’ve put the story first and spent as much time as you can to get familiar with the dialogue, you have full permission to release the need to “do it perfectly” without looking at the script. Don’t put unnecessary pressure on yourself when you should be focusing on acting.

So what does it mean to focus on the story? Though that could be an entire course on its own, here are a few bullet points.

Not always. Focus on story first. Once you’ve worked on the important elements of story and created mental images for everything you’re talking about, you’ll find you’ve got a lot of the text memorized.

As for the rest – do your best with the time you’re given. Remember that memorization is a muscle. The more you work it, the better you’ll be for next time.

Practice going to your page to get a line while still maintaining the energy and intention of what you’re saying. And be sure to look at the reader when it would be natural to want to see another person’s reaction

So the answer to “Do I need to be off-book in my auditions?” is yes and no. You need to appear like a prepared professional who is not working with the final draft quite yet. That means your script is in-hand. Maybe you look at it, maybe you don’t. But you’re delivering a solid, nuanced performance with or without the looking at the words. Break a leg

For more ideas about what you should actually be focusing on when prepping for an audition, grab our FREE Audition Checklist. It’s a 7 page, info-packed treasure trove of audition prep goodness! You work so hard for each audition opportunity! Go in there and knock their socks off!