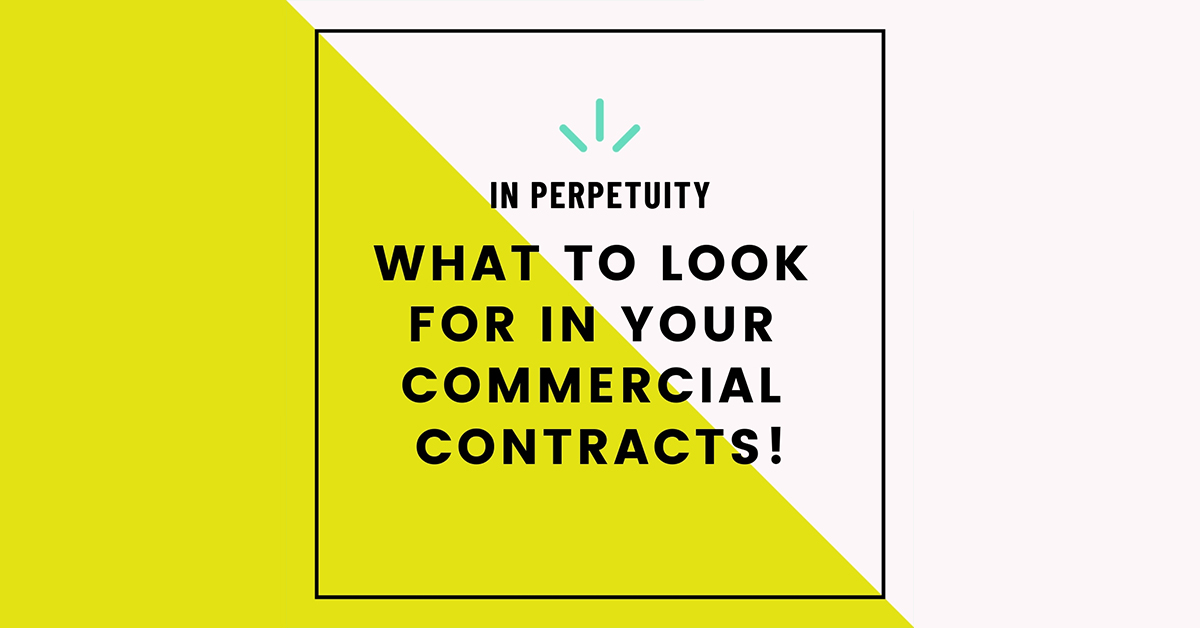 So you’ve booked a gig off LA Casting. It’s an infomercial for a hair product that pays $500/day, $1000 buyout…In perpetuity. But what does that mean?

WHAT DOES ‘IN PERPETUITY’ MEAN?

“In perpetuity” means…forever. And ever.

They can use your image in this infomercial FOREVER! Oh, I can hear what you’re saying “Um…so! I just want to work, and that’s $1500 bucks!.” The immediate money can be tempting. I’m not saying don’t do the job, but I want you to understand what you’re signing on for! Most people will sign the contract without even knowing that it’s in there, and that is where you can create problems for your future self.

When you finally land that kick-ass commercial agent and they send you out for an Herbal Essences commercial, there is a good chance Herbal Essences won’t be okay with you also promoting a competing brand of hair care. Even if it’s only on at 1am in Tulsa. This can cost you big bucks and you will definitely be kicking yourself.

Here’s another example: What if you did a $500 commercial for a slightly embarrassing product. Nothing crazy. But maybe a kooky tampon commercial or even an “innocent” phone chat hotline. It was a funny spot and you needed the money, so no big deal right? At least you’re on TV!

But what happens when you finally hit it big? Now, you’re starring in blockbuster hits and there’s buzz of a possible Oscar nod. Then BLAMO! Guess who just became that tampon company’s FREE spokesperson! They get to have an Oscar nominated actress endorsing their product and they don’t owe you one dime.

You’re going to need to make these decisions on a case by case basis. But you must always, always, ALWAYS, read your contract!

WHAT TO LOOK FOR IN YOUR CONTRACT

If you do nothing else, just scan for the words “in perpetuity”…always. Even if you are on a SAG-AFTRA commercial and they already told you that you’ll be paid residuals. ALWAYS! But particularly if you’re doing non-union work, since that where it happens most often.

Years ago, I worked on a huge commercial with at least 20 actors working on one day, and I was the only actor who noticed that they had snuck that pesky word in. When I told other people that they needed to question it before they left, the producers were pretty sour with me. Hey, not my problem, dude!

When you arrive on set, politely inquire about the contract right upfront. On many sets, they will hand it to you right away anyway so you can read it and sign. They will hover over you because they are busy and want you to hurry. Don’t let that distract you from reading everything! Politely ask them to let you have a moment to read over what you are signing.

If they don’t hand it to you right away, make sure that they get it to you before you’re done with hair/makeup/wardrobe for sure. After that, you’re on your way to set and that is just too late.

They are technically not supposed to film you until you’ve signed. I’ve had 2nd AD’s ask me to sign while I WAS WALKING to set. Umm…no.

I politely told them that I’ve been in hair and makeup for an hour and would’ve had plenty of time to review this contract at that time if they had provided it. And guess what? The contract had a lot of problems including a previously unmentioned “in perpetuity” clause. Ahem!

HANDLING CHANGES TO YOUR CONTRACT

So, you’ve noticed the two DEATH WORDS in your contract and you want to inquire about them, what do you do? First of all, do not become a know-it-all diva.

If this is a job you’ve booked for yourself online, they’re probably not going to represented actors for a reason, and I bet that reason often includes a perpetuity clause.

If it hasn’t been explicitly stated in your audition slip, you should gather all intel about project usage before the shoot. You can ask:

“What is the intended use for this project?”
“How long does this buyout cover?

They should give you that info right away. This way, if you show up to set and find those words slipped in, you have a lot more leverage and can simply walk if you need to.

On one hand, you’re gonna look like a pretty big jerk if you walk off this set right before filming. On the other, this is how you hope to make your living, and you ain’t no pushover. By doing your homework before the shoot, you’ll likely avoid this ickiness completely.

That’s it for today! READ THOSE CONTRACTS!

Wanna know more about the business of the biz? Check out our Happy Actors courses here. We’ve got Actor Business Plan, which is a comprehensive course to launch your professional career fast. We’ve also got Organize Your Biz, for established actors that just need to streamline their business. Woohoo!