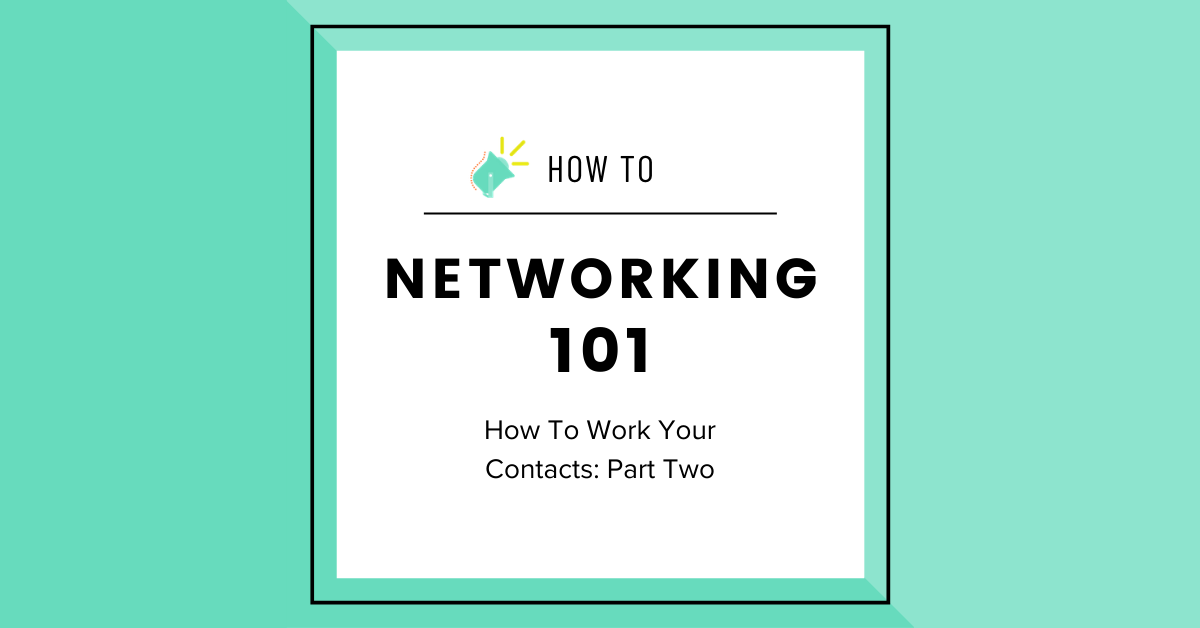 Welcome back to Part Two of “How To Work Your Contacts”! With any luck, you’ve checked out Part One and got your assets all set up! So let’s dive in!

Asking someone for a favor, especially when you’ve just met them, is just no good. To be truthful, it tends to make people feel really uncomfortable. Since I’ve been in Los Angeles, I’ve found that, contrary to the scary Hollywood tales, people are generally very nice. Most casting directors/producers/agents/directors are looking for great talent and are super excited when they find it.

Here are a few reasons they may not want to help you. Hold on to your pants, because we’re gonna get real!

They may not actually have the ability to help.

I have a friend that works as a casting assistant and she has complained to me that so many people kiss up to her to get an audition. Yet, she has absolutely no power to do that for them.

They may not have time to help.

Every time you want someone to “meet with you for coffee” or read your feature length script, it’s costs them time. And time is precious. Personally, I read at an average speed. So, at best, it’s going to take me 45 minutes to read your feature. Not to mention call or write back with thoughts or notes. Not everyone is willing to gamble that time on someone they hardly know.

Side note: I don’t think you should never ask someone for coffee! Just understand, if the person is quite a few tiers above you, they may just not have time – you’re probably not the only one asking.

They may not want to “waste” a favor on you.

Full disclosure: I’ve asked for another actor to refer me to their agent before. It didn’t work. And I’ve had many actors ask for a referral to mine. Now, I don’t blame anyone for asking, I get it. But, I want my referrals to really mean something. So, when I call my manager and ask for him to look at someone, he’ll know to listen. If I did it every time someone asked, I’d start to get annoying pretty fast.

EESH! That one was rough!

Listen, I don’t like to dislike people. But some people make themselves easy to dislike. Try to limit your negative Facebook posts. Choose wisely about when to get political. And just be a nice, positive person as much as you can. People like to help people they LIKE! I remember a few years back, I was interning at my agent’s office. My job was to open all of the actors headshot submissions, toss the ones that were not stapled together or were black & white, and organize the pile. While opening envelopes, I came upon the headshot of a girl who had been my scene partner in acting class years ago. I hadn’t spoken to her since then, but I remember she was nice. I happily put her headshot on the top of the pile with a post-it note that read “She’s a great actress.” To this day, I’ve never seen or heard from her and have no idea if she ever got a meeting. But I helped her because I liked her.

They may not be interested in what you’re selling .

This kind of goes with the point above. They may not be a fan of your work. But remember, if you’re trying to please everyone, you’re pleasing no one! Don’t fret, just keep getting better at your respective craft until…

Someone OFFERS to do you a favor.

This is what you’re working for. The best case scenario is that everything about you, your material, your professionalism, talent and energy all create this perfect storm around you and your contacts OFFER to help you. I am lucky enough to have had this happen to me a handful of times. Unbeknownst to me, a friend or contact has forwarded my info on to someone that could help me…just because.

See, people LOVE helping other people. And people want to help YOU! If someone believes in you, has the time and the ability to help you, they probably will. The number of times I have been asked to refer someone to my agent and did = maybe twice. However, I’ve sneakily given my agents the info of, at least, four actors that I’ve loved. Two of them got meetings. The thing is, I was so excited to help them because I believed in their work and knew they would make me look good. And that will happen for you as long as you keep working on your materials, stay positive and…

What can YOU do to help your contacts? It’s a great thing to be owed a favor in this town. So, take a moment today to see if there is anything you can do to help someone else out. Maybe you know how to edit and can help someone with their reel. Maybe you can introduce two people that would do really great work together. Whatever it is, come from a place to humility and service and trust that others will notice and do the same. And…

Let people know how they can help.

This may sound contrary to everything I’ve already said, but hold on to your shorts. Saying you’re looking for an agent isn’t asking. Mentioning that you’re so excited to have just finished your comedy pilot is not asking. You’re putting zero obligation on the person you’re telling. And if they want to help you, now they know how!

Lastly, if you do decide that the timing is right for you to approach a contact for a favor, ask once. If they say “no”, trust that they will reach out if they ever change their mind. Resist the urge to keep asking. Be brave enough to drop your ego and ask for feedback on your script/video/reel. They may not have time to give it to you, but if they do, take the parts of it that can help you and ditch the rest. Do not become defensive, just thank them for taking the time to give you their opinion. And then get out there and make more contacts.

That’s it for today. What advice do you have for reaching out to contacts?