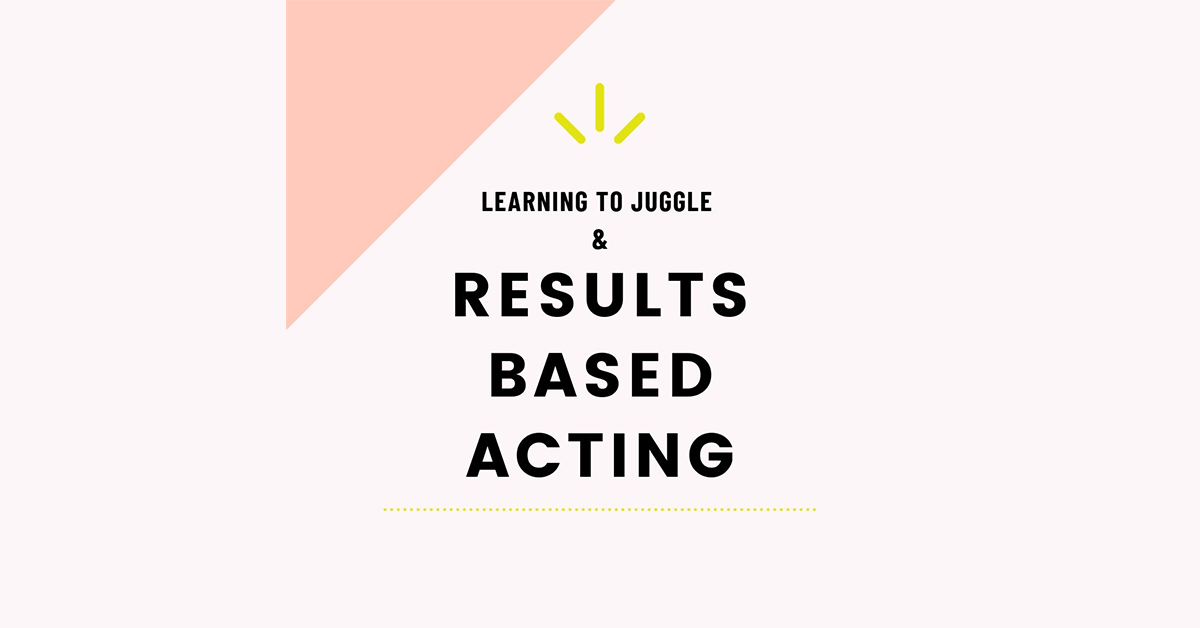 In this post, we’ll talk about the art of memorizing lines and “crying on cue.” But we’re gonna go about it a little differently.

My favorite podcast right now is Akimbo from “my boyfriend Seth Godin.” It has absolutely nothing to do with acting but I always find nuggets of wisdom I can apply to my acting career. Some favorite episodes that I’d recommend you check out are: “You’re It”, “Finite and Infinite Games”, and “Shun The Non-Believers.”

But today, I’d like to talk about his episode, “Juggling and Bicycles” and how it applies to us as actors. It unpacks the idea of what it means to develop a skill the right way, slowly, instead of the way it seems like it’s “supposed to be learned.

Below are my paraphrased notes from the episode. But I encourage you to listen to the whole audio yourself.

The problem with juggling is that people think it’s about catching. If you watch people try to juggle, they will do almost anything to NOT drop a ball. Because dropping a ball costs you status. They will lunge for the ball. When people watch a juggler, they’ll keep track of how many times the juggler drops the ball – because jugglers aren’t supposed to drop the ball. So the entire focus of learning to juggle is about not making any mistakes: catch the ball.

But that’s the problem. Because juggling is not about catching, it’s about throwing. If you throw well, the catching will take care of itself. But if you’re lunging all the time to catch, your throws will get worse and it will all end up on the ground.

So the way to learn to juggle is pretty simple. One ball – toss it from one hand to the other. Catch it in the other hand without moving. If you have to move to catch it, let the ball drop. Do this over and over, until you can do this every time. There’s going to be a lot of dropping. Dropping is fine. We’re not doing it so we can learn to catch. We’re doing it so we can learn to throw.

Once you can do that perfectly every time, you can add a second ball. Throw throw, catch catch. Don’t lunge for the ball. If it drops, that’s okay. Over time, “throw throw catch catch” isn’t going to be very difficult for you. It’s going to be natural. Then you’ll add a third ball and throw throw throw… Now you know how to juggle because you learned how to throw. But too often we get hung up on how it’s “supposed to be” as opposed to what works to get us there.

In Seth’s example here, the average juggler is focusing on the result – catching the ball. Because that’s what he thinks juggling is all about. And it’s not really his fault, because people watching the juggler don’t think “wow, he throws so well,” they think “wow, he never dropped the ball.” the throwing is invisible to the viewer, but it’s actually the most important part.

Wow. How true this is for us actors. So often, the focus is on memorizing and “getting all the lines right.” Because if you completely forget your lines, it’s obvious to you and your audience. So, all the focus goes on the lines first. But this is backward. It’s playing the result.

The same goes for “crying on cue.” That is playing the result. The viewer may say “Wow, she cried right when she was supposed to.” but it will read as false unless you’ve given yourself a truly organic reason for those tears.

The most important part of acting is the invisible part. It’s all the work you’ve done to make the story specific. To create mental images of every single thing you’re talking about. It’s creating a moment before and uncovering the subtext of each line. This is the part that most often goes by the wayside in the interest of getting it memorized perfectly.

Focus on your acting process – the results will follow

If you give the story the attention it deserves and do all this work to “throw perfectly.” the lines (and crying) start to take care of themselves. Yes, you need to be able to memorize lines to be a working actor, just like you need to catch the ball to be a juggler. But lines mean nothing if you’re not actually acting underneath. And anyone watching can see through the charade of you only memorizing lines.

So what would I recommend for your auditions as you learn to throw and you’re bound to drop the ball sometimes? Learn to use the script effectively. Practice holding the paper where it’s easy to grab a line while still staying in character. This takes practice, don’t wing it.

Me and many of my friends have booked roles when we weren’t fully memorized because we were serving the story first. Check out Margie Haber’s book for a great technique about how to do this effectively. I also love Christinna Chauncey’s audition technique intensive for practicing your ability to get off the page.

Not playing the result is SO HARD. But you can do hard things. Learn to throw first and the results will come.