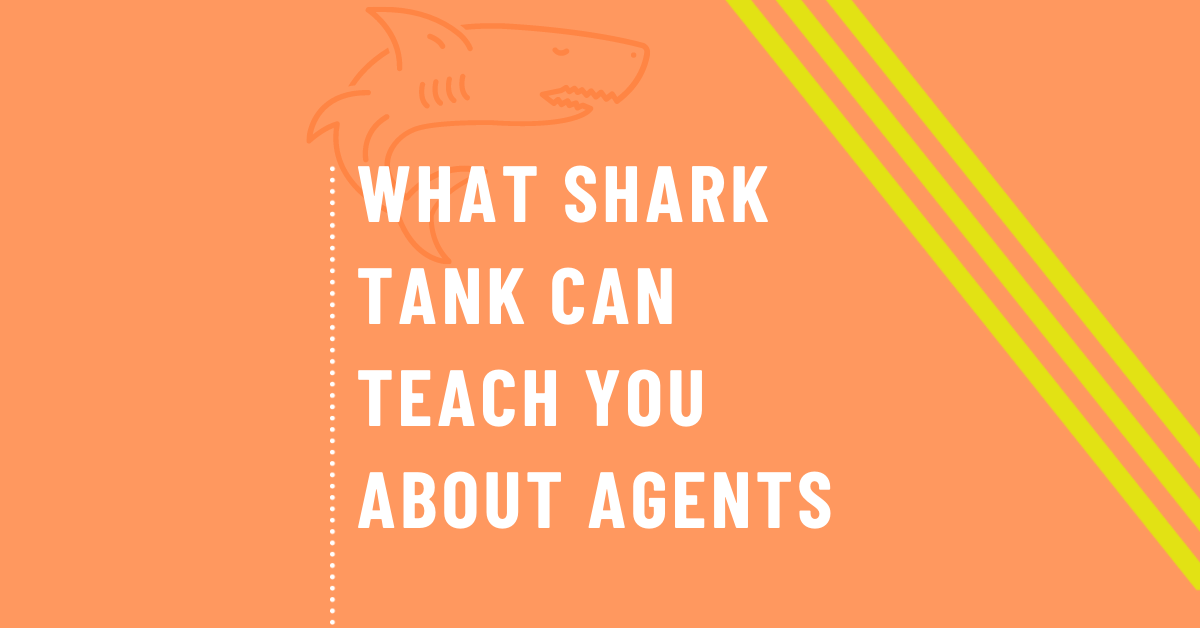 I was watching the latest episode of Shark Tank recently because… quarantine, right? And it hit me just how much the sharks are like talent agents! Actors get pretty much left in the dark as to why an agent chooses to sign them or not.

But look no further than some of the Shark’s favorite quotes to get an inside peek at what those talent agents are thinking. I’ve taken a few truths I’ve learned from Shark Tank that apply to your acting career. Let’s dive in!

You have to hustle first

The sharks want to know what you’ve accomplished on your own, before they help. Agents are no different.

Even if all you’ve booked are student films, it tells an agent several people think your audition skills and talent are up-to-snuff. Now, with the agent’s contacts, she can help elevate what you’ve already been doing. But she doesn’t want to do all the work from scratch.

Both the sharks and agents want to see proof that people are buying what you’re selling. The way you show this is through credits and tape. Don’t be bitter or afraid of doing small, low-pay products for quite some time. Once you create momentum on your own, investors and agents are more likely to jump on the bandwagon.

You have to believe in what you’re selling

Entrepreneurs who enter “The Tank” need to believe their business is worthy of a deal. If they have doubts, how are the sharks supposed to trust their money and time will be well-spent?

Self-deprecation is not your friend in an agent meeting! After all, you know your acting talent and skill better than anyone else. If you’re not confident that you’re ready to work professionally, they have no reason to believe you are. You must believe you’re worth signing and be able to communicate why.

These things are important and you should be able to communicate them with confidence.

They know the industry better than you.

Lori knows which products sell like gangbusters on QVC. Damon knows more about the fashion industry than you’ll likely ever know. Sometimes the sharks won’t make a deal because they have inside info about market demands that you don’t. That doesn’t mean the product or business isn’t great.

Agents know far more about agenting than you do. It’s what they do for 8-10 hours every day. They know how casting thinks. They’ve seen other actors self-tape for the same roles you’re taping for. Agents know which clients and types are getting the most opportunities and bookings.

An agent may love you but if they don’t think they can provide you with the right opportunities, they’re not going to sign you. I can’t count the number of times I’ve heard Barbara say, “I think it’s a great project but I don’t think I can add value to you. So I’m out.” It’s heartbreaking to the contestant but, it’s the right thing to do.

All the love of a product or company doesn’t matter to the sharks if they can’t make money. It is why they are there. Their job is not to make your dreams come true. Mr. Wonderful says: “All I care about is that I go to bed richer today than I did yesterday!” Sounds harsh. But that’s why he has the money to invest.

Most agents love actors. But to stay in business, they have to make money. Your job is to provide a potential agent with all the info they need to see dollar signs. These are things that set you apart from the average actor. Here are few to get your wheels spinning:

These are all things that get an agent’s mind thinking “Hmmm… I don’t have many people on my roster who fill these gaps. This could pay off!” If you’ve got ‘em, make sure you put these qualities up front and center when communicating with your future agent.

Some sharks are nicer than others

Most of the time, Kevin O’Leary acts like a butt-head. And then there’s Barbara, who is sweet as can be. So when you meet up with an agent and they are scary and rude, it has nothing to do with you. Don’t let it rattle you.

I’ve had meetings where the agents were so rude, I wondered why they called me in at all. Was it just so they could taste some actor blood today? Damn!

Always remember, agents aren’t scary or rude. Some people who become agents are scary and rude. So take their attitude toward you with a grain of salt.

Marketing doesn’t mean anything if your product isn’t great

The sharks love good branding and a solid pitch. But if your product is mediocre, they won’t make a deal. They know customers won’t come back again and again, so what’s the point?

An agent’s job is to represent actors who are ready to work today. Not in six months.

But trust me, friend. I know about the sweet siren song of the agent. It does feel like “If I could just have someone representing me and getting me auditions WHILE I’m getting better, that would be ideal!”

Yes, it would. And maybe you’ll get lucky and sign before you’re ready because you have one of those money-making qualities mentioned above. But I see green actors spending month after month pounding the pavement in search of an agent. Spending hundreds of dollars on agent showcases. There comes a time when you need to say, “I’m stepping back from the agent hunt for six months to improve my skills.” And then you try again.

You must be able to destroy the competition

One of Kevin’s favorite lines: “What’s proprietary about this?”  He isn’t interested in getting into an already dominated market. If a new company is selling athletic shoes, it’s going to be hard to catch up with the likes of Nike, Adidas, and Reebok.

If your look and type is in a broad category, an agent will likely feel the same about you.

How do you do this? You get honest and critical with yourself about your materials and skill level. How comfortable do you feel when you audition? What level of feedback are you getting from your coaches? Do your marketing materials accurately represent your type and brand?

You do this by doing lots and lots of work. Being in plays, writing your own scripts to film. Trying things and failing. Until one day you start hearing people say “you’re so funny when you do x” or “These videos make my day!” You’ll discover what people really love to see you do! And then you do more of it.

It’s not an agent’s job to prove you’re different than what we’re already seeing on screen. It’s yours.

Getting comfy with this business stuff

I know the “business stuff” can sound dry and boring. But it won’t be when your clarity starts turning into real momentum in your career.

When you learn to view this career as a business it really is, your next actions become so much clearer! You’ve got lots of ways to move forward toward that next big booking.

“Okay Tristen, I’m hearing what you’re saying. But I need a little more help wrapping my brain around all this!”

I got you, boo! I’m bringing my masterclass back in just a few weeks! Hop on the waitlist and I’ll let you know when registration opens.

We’ll completely rewire your brain for success by getting into the minds of agents, casting directors, and directors! I can’t wait to see you there.