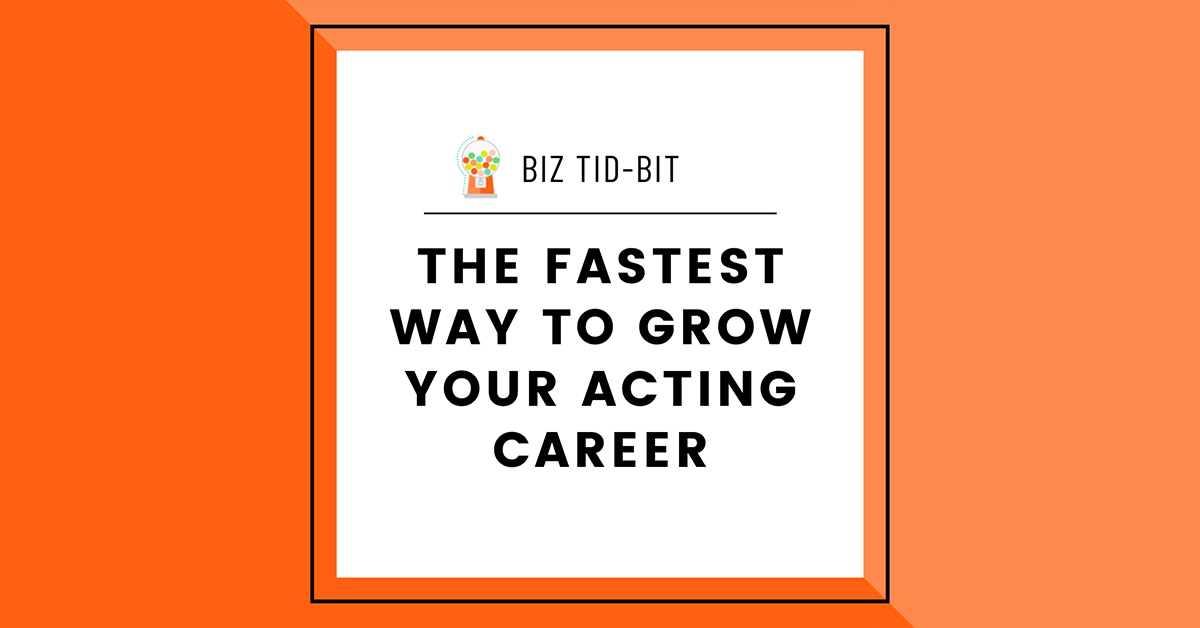 There are so many things you can do for your acting business that it’s hard to keep up with it all! But what is the most powerful thing you can possibly do to move your acting career forward? I’m so glad you’ve asked.

The fastest way to propel your career forward is: GET PEOPLE TO WATCH YOU ACT. Period.

That’s right. It’s not new headshots. It’s not another acting class. And it’s not buying followers on Instagram.

HOW AMAZON.COM RELATES TO YOUR ACTING CAREER

Hold on tight, this is gonna get “heady” for a second. I promise to tie it back to your career!

In a vast sea of thousands of actors to choose from, you’re at risk of becoming a commodity.

“A commodity is a product or a service that no one cared enough about to market.”

Amazon has made billions selling commodities. But it doesn’t really care which commodity you purchase.

Let’s use the example of buying a water bottle on Amazon.

With so many choices, people are forced to filter by price, rating, reviews or some other factor that has no actual relationship to the quality of the product.

Back in the old days, you had to physically go to Target to find a water bottle. There would only be ten to fifteen choices. You could hold them in your hand and see them up close. Maybe you’d still pick the cheapest one, but you were able to make an informed decision.

Now the internet is here and Amazon is taking over the world! It’s becoming increasingly harder to see a product up close and in-person before making a purchase. So you’re forced to use filters.

There’s always been a never-ending list of actors to choose from but the internet and electronic submissions have made it downright overwhelming. If you allow yourself to be just a commodity – a nice face, nice headshot, and mediocre reel – then you have absolutely zero shot of making it through any of the filters casting directors use to find talent.

You are not a commodity. You are an artist. But no one will ever know that if you don’t let them see what you can offer

You have to let them see your artistry. The only way to do that is to be acting. Let’s look at five options for you to get seen right away.

Acting class counts as “getting people to watch you act.” Yes, you’re paying for them to watch, but you’re also getting weekly practice and exposure to diverse material. Do not discount the people in your acting class as “not important enough” to be included on this list. Lateral networking is more powerful than looking far above your tier for someone to pull you up!

Talented people like to associate with talented people. By being in class, you’re going to attract more of your kind into your circle. These are the people who will think of you first when casting their own projects. No audition required because they’ve seen you kill it every single week.

I know you want to be paid for acting. Especially if you’re still working a ton of shifts to pay the bills – it can be hard to say yes to working in a web series for three days with no pay. I totally get it. But if I lived in your pocket and could pop out and be the angel on your shoulder, I’d be whispering “make it work!”

Friend’s table reads, play readings, a one-off sketch show, anything where people are going to witness that talent of yours, try to make it happen. I would say 80% of my very favorite projects I’ve ever booked were a result of a previous job I did as a favor.

Nobody asks you to be in their project if they think you suck – even when it’s for free. They do it because you’re awesome and producing films is very expensive. Most times, they’re not trying to take advantage – they’re just trying to create opportunities for everyone involved.

If people want you to act, give the fans what they want.

3. YOU CAN PAY TO BE IN A SHOWCASE OR WORKSHOP

Boom. You’re acting. And right in front of the buyers. It’s certainly an option to consider. But it is the least effective way to build your fanbase. WHY? Here are a couple of reasons:

Of all the ideas on this list, this is where most actors prefer to spend their time and money. Because it FEELS like the quickest way to jump the line. But please take it from me, the line rarely gets jumped from workshops.

If you decide to go this route, at least you’re getting your talent seen. But I promise your time and resources are better spent on more impactful work that will pay dividends over the long haul. Like what?

Plays, sketch shows, stand-up, you name it. Getting out into the world and performing live is so much more powerful in the long haul. For starters, you’re getting to actually ACT – and not just two minutes per night! Secondly, you never know who is in the crowd! Potentially one of your newest rabid fans, or even a producer. By showing her an incredible performance, you give her the space to go home and investigate what else you’ve done. If she loves it, she feels like a super-genus for spotting this “diamond in the rough!” What a win!

When people see you perform live and love what you do, they also develop a deeper connection with you and your journey. So there’s a lot to be gained by getting out there and doing what you actually love to do!

And then there’s the big kahuna. Creating your own filmed content. I don’t care if you’re “not a writer” or “don’t have any good ideas” or whereber the excuse you’re telling yourself comes from. Creating filmed content gives you the most bang for your buck in three ways.

It cannot be said enough. Would you really rather sit around waiting for another round of headshots and an agent, all so you can go in for a co-star audition twice a year, and only then MAYBE work as an actor. NO! GET ACTING!

2. You gain on set experience.

Not only as an actor. You’ll start to understand screenwriting and serving the story. You’ll figure out your angles and eyelines. You’ll gain insight to understand how to help editor by learning what it is they need from a performance to create the big picture.

This is the most fun, low-pressure way to start gaining experience on-camera. So especially if you’re new to acting for film, start here!

3. It can be reused forever and ever!

Y’all! This is the very best part. Once you’ve created a piece of content, you get to use it in so many ways. First, of course, is putting it on your reel! Remember, a killer reel is the single most important tool in your career arsenal! So adding new and fresh material to make it stronger is a major plus.

CREATING A MASSIVE BODY OF WORK

My goal for you is that you have an embarrassment of riches (in terms of footage) to show someone who wants to see you act. Sure, in an ideal world, you’d direct them to your long-running hit CBS show that just went into syndication. But if you’re not there yet, it’s up to you to create the wormhole – I talk about how to do that in an upcoming post.

We’re living in a true fan economy. The decision-makers are following the fans to choose talent, not trying to make stars from nothing like years ago. And it is never ever going back to the old way.

Don’t get left in the dust! Get on board this new moving train and BE THE ACTOR you want to be right now.